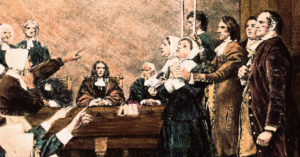 I suggested in a recent paper that the famous witch trials of history may have been faked.

I will show evidence that suggestion is true, at least regarding the Salem event.

Witchcraft in the 17th century, came up as a tangential topic and I was led to remind myself that it was also a topic in this past century.

I remembered that Arthur Miller debuted his play “The Crucible”, in 1953.

This reminded me that the Witchcraft Act in England was repealed in 1951 and Gerald Gardner started Wicca in 1954.

Those close dates seemed more than a coincidence, so I suggested maybe they weren’t.

If “The Crucible” came out to support current projects, then it was possible that the Salem Witch trials were also a project.

Of course, if The Crucible play was part of a project in 1953, then the 1996 film, which Miller wrote, would be a project.